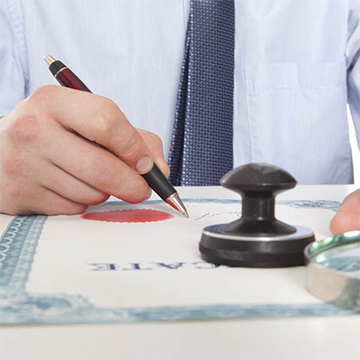 Documents and certificates to be professionally translated, which shall be sworn by a sworn or "official" translator.

Do you need to professionally translate a document or a certificate, for example to submit it to an administrative office or to a Law Court?

Since 1987 we have been doing sworn translations into such widely spoken languages as English, French, German, Spanish, but also into other languages such as Romanian, Russian, Ukrainian, Serbo-Croatian, Arabic, Turkish, Chinese, Japanese, etc..

Who is a sworn translator?

He is a professional translator. He ensures quality in translations, he is listed in the Register of Technical Consultants to the Judge (“C.T.U.”) of an Italian Law Court (not necessarily the Law Court where the translator lives at present) and he is usually listed in the Roll of Qualified Specialists and Experts of the Chamber of Commerce of the city where he lives. He shall go in person to the Law Court and take both a written and oral oath before  an officer at an “Ufficio del Giudice di Pace” (Justice of the Peace’s Office) or before an Officer at a “Cancelleria di Volontaria Giurisdizione” (Court Office of Non Contentious Jurisdiction) or finally before a Notary Public. After being cautioned as by law enacted, the translator shall declare on oath: “I swear that I have performed the operations entrusted to me faithfully and to the best of my ability, with the sole purpose of making the truth known to the Court Judges”. Namely, he shall ensure that his translation is a true and faithful rendering of the contents of the deed attached as an original copy or as a true certified copy, thereby assuming any criminal responsibility he might incur if he committed perjury, i.e. the criminal offense of making false statements under oath.

Unfortunately, it should be underlined that in Italy the profession of translator is not a regulated profession, in that there is no Official Roll of Translators and this normative gap sometimes brings about too light-minded advice on those who are allowed to do such translations. Undoubtedly, it is not a task within anybody’s reach, no matter what you are told…

GET A FREE QUOTE!